In The Aftermath: Rebuilding The Pueblo

In The Aftermath: Rebuilding The Pueblo

As Spanish settlement in New Mexico progressed, quarrels between the temporal and ecclesiastical authorities in the colony often arose concerning treatment of the Indians. 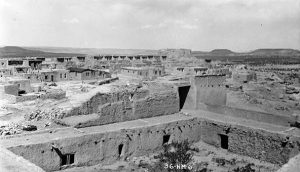 Indian complaints of abuse of power reached Mexico and prompted the 1620 viceregal orders to Governor Juan de Eulate and to Fray Estevan de Perea, superiors of the Franciscan province. These orders appear to have been based on the works of the second audencia in Mexico (1530-35), which passed a series of humanitarian ordinances to revise administration in Indian Pueblos. Traditions thereby established still exist today at Acoma.

Subsequent to Onate’s recall, the New Mexican colony began to decline, as did the missions, due to continuing disputes between political and religious authorities. The Franciscan Province of the Holy Gospel, from its headquarters in Mexico City, pushed for more conversions and the reestablishment of mission activities at some pueblos. It was this action that lead to Fray Juan Ramirez’s arrival at Acoma in 1629.