Archaeology and Legend: How Old is Acoma?

Archaeology and Legend: How Old is Acoma?

Contemporary historical evidence about the “Kingdome of Acus” exists primarily as a result of early and extensive Spanish exploration far north of Mexico City. Investigation of the southwestern region of the present-day United States began by chance when Alvar Nunez Cabeza de Vaca and three companions abandoned an ill-fated expedition to the Florida coast, wandering instead through much of what is now Texas and northern Mexico and finally arriving at the Spanish outposts in Sinaloa in 1536. 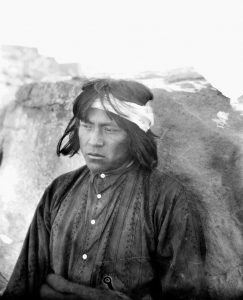 Cabeza de Vaca’s new of “settlements to the north and west of the confluence of two rivers” and his report that “in some high mountains toward the north… there were villages with many people and very big houses” stirred the imagination of others.

The first viceroy of New Spain, Antonio de Mendoza, based on vague rumors and speculation about the possibility of another rich Aztec or Inca kingdom on the northern reaches of unknown regions, excited other potential explorers. The result was the formation of an entrada, or entrance, into the North Country undertaken in 1539 by a small part led by Franciscan Fray Marcos de Niza. Making their way into present-day Arizona and western New Mexico, Niza and his men probably did not visit Acoma. An original description of their journey, however, indicated that they did reach the fabled Seven Cities of Cibola (Zuni Pueblo), adding that “beyond the Seven Cities… there were three kingdoms called Marata, Acus and Fonteac, and the people of these wore turquoise hanging from their ears and noses.”

The next historic reference to Acoma is found in a letter from Francisco de Coronado dated August 3, 1540. Leading a second and larger expedition into the area, Coronado informed Viceroy Mendoza about the places he had heard of which were supposed to be near Cibola. One of these was Acus, which Fray Marcos had called a kingdom. Both he and Coronado distinguished Acus from Ahacus, or Hawikuh, one of the Seven Cities of Zuni.

A member of Alvarado’s party described Acoma as “the greatest stronghold ever seen in the world. The natives… came down to meet us peacefully, although they might have spared themselves the trouble and remained on their rock, for we would not have been able to disturb them in the least” Alvarado himself recorded, “The city was built on a high rock. The ascent was so difficult that we repented climbing to the top. The houses are three and four stories high. The people… of the same type as those in the province of Cibola… have abundant supplies of maize, beans and turkeys like those of New Spain.” 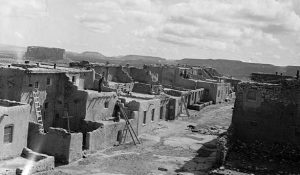 With Coronado’s return to Mexico in the spring of 1542, disappointments arising from his expedition dampened further efforts to explore or colonize areas along the Rio Grande. Still, rumors and stories about populated, perhaps even rich, regions of the north continued to circulate in Mexico. Such rumors inspired the expedition of Fra Agustin Rodriguez some forty years later (1581) as well as that of Fray Bernaldino Beltran the following year. Both expeditions reported contact with the Acoma people. Grandiose reports like that of Antonio de Espejo, a wealthy citizen of Mexico who had financed Beltran’s expedition, spoke of a “lake of gold” and the mines of western Arizona, promoting further exploration and, ultimately, colonization. In 1586, the council of the Indies directs the viceroy in Mexico City to “endeavor to carry out the discovery, pacification and settlement of” New Mexico.

Spanish colonization brought about many changes in the traditional Indian ways of life. Some changes were gradual while others were sudden and violent.

By 1595, Don Juan de Onate had been awarded a contract by Spanish authorities allowing him to conquer and pacify New Mexico. Having persuaded 129 soldier-colonists, their women, children and servants, to accompany him, Onate set out on April 20, 1598, joined by ten Franciscans and two lay brothers.

Word of these latest “invaders” traveled from pueblo to pueblo, but several months passed before the Spanish arrived at Old Acoma. Thus began a time of conflict- A dark chapter in the history of the Pueblo of Acoma and its people.

The Spanish asked the Acoma people to subscribe to the Act of Obedience and Homage- a formal ceremony during which the Acomas agreed to obey the king of Spain. Misunderstanding, the chiefs acquiesced only to retaliate once the ramifications of their acquiescence became clear. 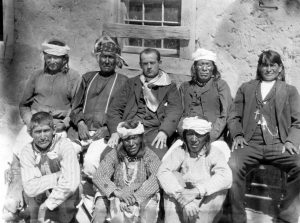 Their retaliation was avenged by the Spanish in a battle that continued for three days. In the end the village and all its provisions were burned and the Spanish took some five hundred Acomas- men, women and children- as prisoners.

One of the most amazing trials in Spanish records followed in the aftermath of these tragic events. The Spanish, according to their custom, conducted legal proceedings to establish responsibility. They satisfied themselves as to the guilt of the Acomas and carried out sentences which today seem both extreme and barbarous.

The trial made news throughout both New Spain and in Europe for many years. When Don Pedro de Peralta was appointed governor of New Mexico in 1609, Onate was ordered to return to Mexico where his residencia, or evaluation of his term in office, subsequently came to pass. Thirty complaints were made against him and on twelve of those counts he was held guilty. Among them were the hangings of two Indians without cause at Acoma and the indiscriminate slaughter there when it was destroyed. For these crimes, Onate was sentenced to perpetual banishment from New Mexico and exiled for four years from Mexico City and its environs for five leagues around.