Today, at the beginning of the twenty-first century, the story of Acoma continues to unfold. While San Esteban Del Rey Mission- its long history and continued revitalization- is an important part of the Acoma legacy, it is but one chapter. The fact that architecture constructed of the earth with the bare hands of their fore bearers has survived for more than 370 years is in and of itself, quite remarkable. Its survival has not been due to chance, rather to the ongoing efforts of many generations of the Acoma people. Since its construction, the perpetual maintenance of San Esteban Del Rey has been the primary responsibility of the Gaugashti, Acoma men designated “the church caretakers.” The Gaugashti are highly respected by the tribal membership, as their role requires life-long commitment and extraordinary responsibility of maintaining a structure of such eminent cultural and historic value to the Acoma people. 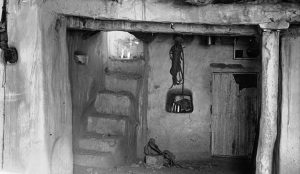 What is perhaps even more remarkable than the preservation of an architectural structure is the revitalization of the people and the culture responsible for its very existence.

The people of modern Acoma, with the establishment of the Pueblo of Acoma Historic Preservation Office, combined with the implementation of the Acoma Language Retention Project and the Acoma Higher Education Program, embrace the present and look hopefully toward the challenges of the future even as they continue to honor their traditions.