Eighty years after Coronado wintered with the Pueblos on the Rio Grande in 1540, the Military and Church had little understanding of the peaceful Pueblo organization and government.  The Pueblo leaders were silent people.

The first recorded assembly of the Pueblo leaders was on July 7, 1598, at Santo Domingo with Oñate, the early Spanish Explorer.  He moved on to San Juan for temporary location, allowing his study of the Pueblos.  After a short decade it was thought advisable to move the administration headquarters toward a more
central location. 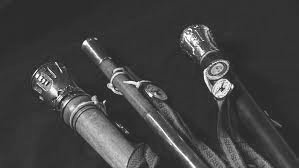 In line with the Spanish pattern of assigning to each Pueblo a Land Grant approximately twenty-five square miles, Oñate selected his capital site on the little mountain stream claiming therefore the like acreage for Santa Fe.

The King of Spain in 1620 therefore issued a Royal Decree requiring each Pueblo, with the close of the calendar year, to choose a governor, lieutenant governor and such

other officers as could be needed to carry on the Pueblo affairs, by popular vote. This they should do without interference of Church or Crown.  Within the week of the calendar year ending they should have their election, and within the first week of the new year they should have their inauguration with such ceremonies as desired.  A silver headed vara, or cane, was given to each Pueblo for the governor as a symbol of his commission and authority to be passed on to succeeding governors. A cross was inscribed on the silver mount as evidence of the support of the Church.

The good Franciscan Fathers following the Good Book of Moses impressed upon the Indians the lessons of leadership in Exodus Four and Numbers Seventeen.  The rod and staff should be their comfort and strength, and their token against all enemies.

There is no record of the elections and the canes during the Pueblo Rebellion from 1680 to about 1692.  In 1692, the majority of the Pueblos were reconciled to the reconquest.  De Vargas was successful in his recognition of leadership.  it was said the leaders often appeared with the official cane as the one salvaged symbol of Spanish supremacy yet tied to the native thinking.  Their elections were resumed, if in truth they were ever neglected; and or one hundred and twenty-five years the annual elections and ceremonial inaugurations saw the several canes handed on to succeeding governors.